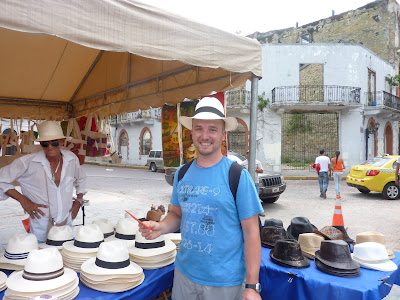 It was an interesting six days in Panama- a minor series of mishaps but a very enjoyable time nonetheless. After getting dropped off by bus right in the middle of an area the Lonely Planet advises avoiding (oops) we managed to navigate ourselves safely to Casco Viejo, the old Panama City. It’s now a strange mix of renovated boutique cafes and hotels adjacent to dilapidated and overgrown buildings. Next we successfully managed to get a taxi (no small feat in Panama where taxis aren’t so interested in where you want to go but whether it’s somewhere they want to take you). We got in before noticing the big knife wedged into the dashboard but weren’t too concerned as we figured carrying weapons must be fairly normal in Panama given that supermarkets have to tell you not to bring your gun or knife into the store.

The taxi took us up to Cerro Ancon, a nature reserve on a hill overlooking the city which gave pretty good views. On the walk down we spotted monkeys and squirrels in the trees and some weird mammal which looked like a rat without a tail. It was only on reaching the bottom that we realised that we’d left our Central America Lonely Planet at the top. After walking back up, back down, then around the hill, putting on a re-enactment of losing our book to a bemused guard we finally gave it up as lost assuming it would be easy to replace. We were wrong. 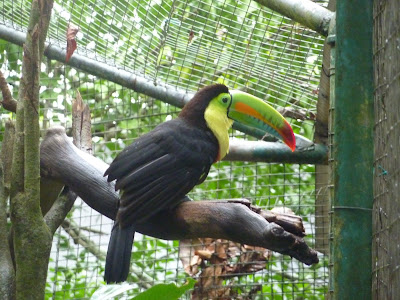 Second mishap involved severely underestimating the time it would take us to get a bus in to a wildlife park that we’d intended to visit before the canal. Over two hours later (the park was 20km away), we arrived and despite the fact that two of the big attractions were absent due to illness (the harpy eagle & the tapir) we had a great time seeing monkeys, toucans, parrots, jaguars and lots of interesting plants- including a cashew tree whose fruit we ate (weird alkaline taste). Realising we’d been admiring the animals too long and were now too late to get to the canal, we decided to extend our stay in Panama for another day. 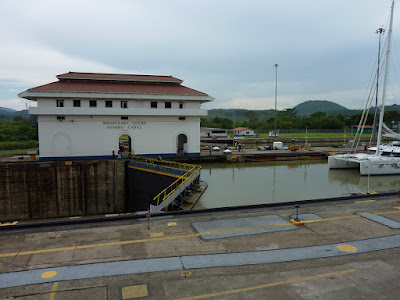 Braving the buses again the next day, we made it to the Miraflores locks where we spent most of the day learning about the history (apparently so many workers died of yellow fever and malaria that they pickled the bodies, sold them for medical research and used the money to build a hospital) & watching boats going through the locks from the Atlantic to the Pacific side. Third mishap involved Alex realising almost too late he’d left his wallet in a taxi, spotting the taxi about to leave a car park onto the highway, dashing across said car park, seeing a hedge in the way he decided it would be safer to roll over it than jump over it in case there was a ditch in the way – he hadn’t realised it was a thorn bush – but nevertheless returned triumphantly with wallet in hand covered in scratches and thorns! Ouch!

Fourth “mishap” involved a hunt to replace our lost Lonely Planet. To cut a long and boring story short, it took us nearly a day. It appears there are very few bookshops in Panama- maybe they’re all straight onto Kindles, either that or they don’t like reading very much… then again maybe with so much other more exciting stuff to do, they don’t need to?