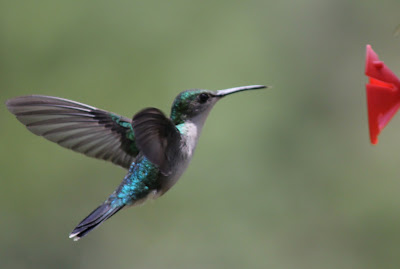 We were looking forward to a hassle and planning free 6 day tour of the Northern Highlands of Peru – the only tour we’ve booked on these travels. During a 10-hour drive from Tarapoto to Chacapoyas, we stopped briefly at an orchid farm (unfortunately, most of them weren’t flowering, but the hummingbirds were very impressive). We soon realised that if speaking Spanish hadn’t been that important before, it looked like it would be in the coming days. After an uneventful night in Chachapoyas, we were collected the following morning to go on a tour of Kuelap – a 1,100 year-old pre-Incan citadel on top of a 3,000m steep-sided mountain top. The three hour drive up, often with sheer drops to one side or the other, was picturesque if a little bumpy. Kuelap itself was very different from Machu Picchu – older and bigger but more overgrown and harder to appreciate its scale. 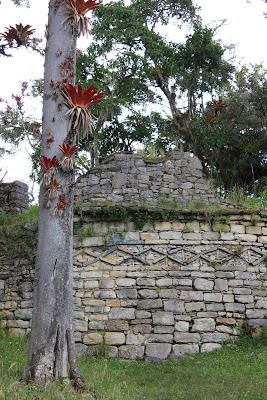 It was here that we met a German girl, Katja, who, whether through bad planning or bad luck, had missed meeting her friends for the trip. Not to be deterred, she decided to walk the “2 hours” to Kuelap on her own. After 4 or 5 hours of walking in intermittent rain, she arrived at a small village without a hostel, hotel or restaurant and realised she wasn’t going to make it that day and that she’d been misled as to how long the walk really was. She spent a very cold night in the house of a local who took pity on her and provided her with a straw bed. Leaving them the following morning, she realised that the money she carried in her purse was missing and so she set off- no food, no water, little money and no idea how she’d get back from Kuelap as it was Easter Sunday. We offered for her to join our tour and so we gained a travelling companion for a couple of days. 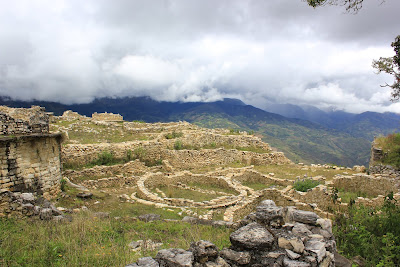 The ride back from Kuelap was made more interesting as not only did the car have non-functioning shock absorbers and a cracked windscreen but the wipers were partly broken – and it was raining. This meant that our driver had to physically push the wipers back down every wipe. As the ventilation was also broken and the windscreen was steaming up he was alternating between pushing the wipers back with his left hand and wiping the inside window with his right whilst still attempting to avoid the numerous pot holes and keep us from driving off the edge. Needless to say, the inevitable (but by no means worst) happened and we hit a pot hole and the front tire deflated. The driver quickly put on the spare (slick!) tyre and it was only a short while before we were off again, though none of us completely relaxed until we were back on sealed roads with no precipice to the side. The journey made arriving at Gocta, a gorgeous new lodge overlooking Gocta waterfall all the more rewarding (yes, we splurged on this). It’s not the kind of place to expect to find at the end of 5km of dirt road – a luxurious hotel whose comfortable rooms and infinity pool overlook the falls 3km away. 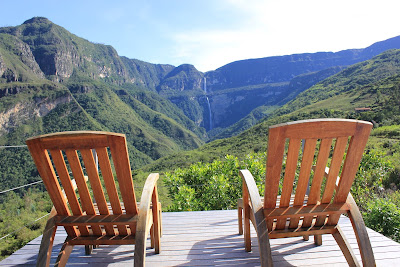 We spent the first full day at Gocta walking to the foot of the waterfall, which according to Lonely Planet is the third highest in the world at 771m but has only received around 2,000 visitors per year since its “discovery” in 2006. Katja joined us again and between the three of us, we managed to translate perhaps 60% of what our Spanish-speaking guide told us about the surrounding flora and fauna of the jungle/cloud forest. The information given at the hostel had said the walk was 6km return but this must have been “as the crow flies” because the one-way sweaty non-crow trip took us 2.5hrs. The return trip (much more uphill) took us much less time, but for unwanted reasons. Three quarters of the way back, Alex felt a sharp pain in his leg and looked down in time to see a small (80cm long) very dark green/black snake slither off into the undergrowth. On inspection, we could see two small blood spots where it had punctured the skin. After an agonising few minutes attempting to explain to the guide what had happened, he eventually seemed to understand and radioed the village. We were met further down the track by a man with a horse to take Alex more quickly to the village whilst Lizzy ran to the hostel to get insurance documents, phones and money. Lizzy met Alex at the local doctor’s “surgery” where we said lots of silent prayers and tried to convince ourselves that the snake probably wasn’t deadly and that, if it was, then we’d be able to get to help in time (which with hindsight, had it been, would’ve been nearly impossible).

Thankfully, Alex didn’t seem to have any immediate symptoms, which helped keep panic at bay, though this was counteracted by most of the village gathering to take a look at the gringo who’d been bitten by a snake – apparently a first for the village. Infuriatingly our guide kept trying to say that we didn’t need to worry or do anything but the village doctor, who we’d initially had little faith in as her first question was about money, agreed he should to go to the hospital. After more anxious waiting, a car eventually arrived (thankfully in much better condition than the last one we took) and we sped off to the nearest hospital an hour away. Once we had mobile phone reception, we got through to a helpful nurse at the insurance company who explained that the hospital needed to identify the snake and do a swab test to identify venom. She told us that although it was positive there were no immediate symptoms, some snake bites can take a while to kill you as they work by slowly congealing your blood (not what we wanted to hear!).

When we finally arrived at the hospital, we sat for an hour before someone wearing no uniform (doctor? nurse? patient?!) walked over, had a cursory look at Alex’s leg and seemed to indicate he was fine to go, having not followed any of the recommendations from the insurance nurse. Despite our protests, we were turned away until some people from the tourist agency (who had been called by a helpful lady from our hotel) turned up. Not only did they speak English but they ensured that Alex was seen. After the hospital staff (clearly grumpy at the tourist agency’s involvement) tokenistically cleaned the wound, they again sent us away. Giving up on the hospital and not willing to take any risks we went to a local internet cafe to try and identify the wretched snake. Whilst we failed to do so, we did manage to verify that it hadn’t been one of the 5 poisonous snakes in the region. Satisfied with that and happy that Alex was still symptom-free, now nearly 5 hours later, we returned to the hotel, physically exhausted, emotionally drained but VERY VERY VERY thankful.

More photos here (none of the snake – we weren’t that quick!)