Famous for whales, dolphins and Albatros, Kaikoura must have been a tiny village no-one had ever heard of before they realised that close to the shore, there’s a deep ocean ridge which brings all the ocean’s big stuff within easy reach. After debating for several hours, we chose to swim with dolphins rather than to go whale watching. The dolphins are of course wild and the boats aren’t allowed to do anything to attract them so after a sickening few hours (oh yes it was rough- but fortunately we’d both taken the Kaikoura Cracker beforehand so no buckets were required by us) we spotted around a hundred. We jumped into the water and were straight into singing mode to attract them- Don’t think I’ve ever sung anything so badly but the dolphins seemed to like it and would appear a few feet in front of us out of the murky water, circle us and then swim off. It was a bit surreal because the water visibility was so bad that it was a bit freaky seeing nothing and then suddenly being within touching distance of a few big dolphins- still pretty cool though. Wonder what else we were close to that we couldn’t see!!

So, whale watching is on the list of things to do in the future… although we’re reliably told that Orcas (killer whales) circle the bay where we’ll be living, so maybe we won’t even have to pay to see them! 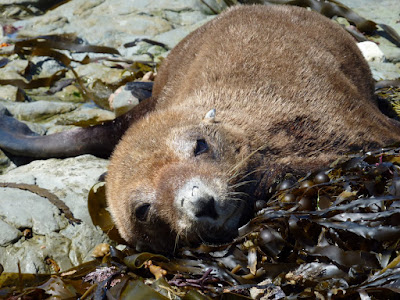 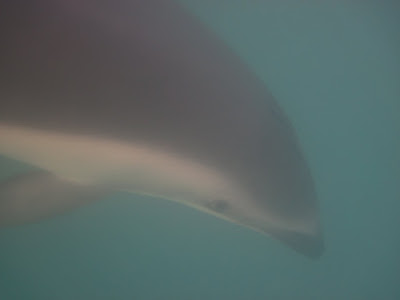 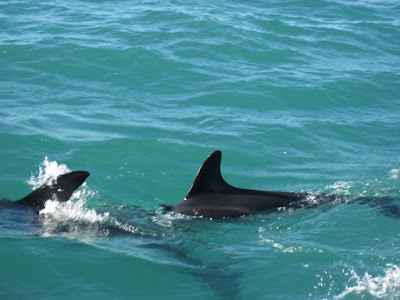 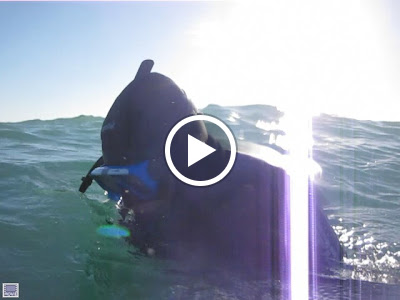