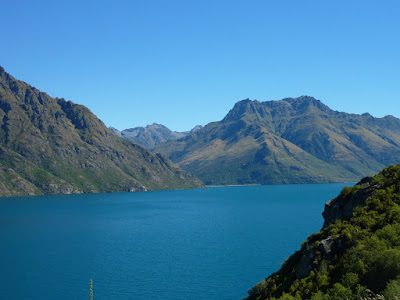 There are so many things to do here to get your heart pumping that it was hard for us to decide what we should do. We ruled out things either of us had done before (paragliding, parachute jumping), things that involved jumping off or out of things at great height for my benefit (bungee jumping), things that meant being cold (for Lizzy’s benefit) for a long time (river surfing) and were left with 2 options – hang-gliding or canyoning. In the end we opted for canyoning as the cheaper option and booked onto a morning of that. What, you may ask, is canyoning? Well it’s scrambling up and down canyons in wet suits, jumping across and into water of varying depth. We both really enjoyed it, but actually found it rather tame and not that action-packed (by nature of there being a group of 10 of us and only 1 person could do each thing at once). For once Lizzy was the chicken as she refused to do the highest jump (8m down into not much water- which she claims she avoided because the previous jump she’d pretty much landed on her face & didn’t want to be face slapped again) which I did several times.  (Normally I’m the chicken when it comes to heights – I had to climb down from the top of a 60m-high building last because I couldn’t jump off it with a rope attached to my back, even though 12 others had done so quite safely). Unfortunately no photo evidence of this activity though – you’re not allowed to take your own camera and they charge rather a lot for the photos they take. A good morning of entertainment and something we’d like to do again, but perhaps in a smaller group. 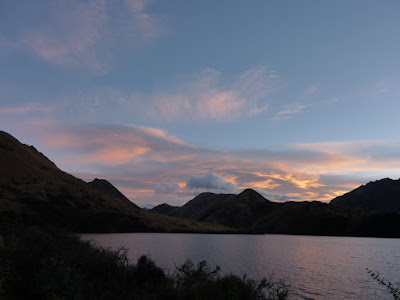 Queenstown is in a lovely setting on the shores of a massive lake – I imagine it is beautiful year-round. Whilst we were here, I had to secretly collect a package and hide it from Lizzy… but all will be revealed about that in a later entry.