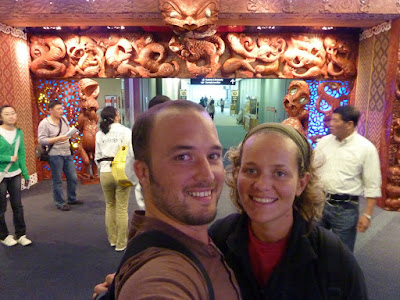 Since Auckland will be our home for the next year or so, we were keen for it to make a good first impression on us. Unfortunately we arrived in the grey & drizzle after having got up at 3.45am for our flight from beautiful Sydney… probably not the best way to enter our new country! Fortunately there was a familiar face to see on that first evening in the shape of Lizzy’s ex-colleague Nick who made us feel very at home and even took the brave move of introducing us smelly backpackers to some of his friends. They seemed to not notice our odour and were really friendly & positive about NZ. We went back to our hostel in better spirits that night.

Over the next few days we took care of practicalities to do with banking, tax, jobs, phones, housing and many other boring things (and exciting things like signing up for a Subway loyalty card!). I was amused as we did some shopping in the supermarket – the brands of fabric conditioners were Fluffy, Cuddly and Snuggly (or similar)… I figured I could come to like a country where things had such cute names!  Whilst exploring areas to live (in North Shore City – a part of Auckland, cunning on the shore to the north of the city) we did manage to scout out the beaches at Takapuna, Castor Bay and Milford, which were nice (if a little windy on the days we saw them), but will have to be explored more thoroughly in the months to come. We have settled on a furnished place in between Milford & Castor Bay which has access to a pool & hot tub as well as all the usual stuff. It’s in a very quiet area (not a great thing when wanting to meet people) and a bit of a slog back from the beach (30 mins uphill), but it’s fine for the time being.

On the Sunday we popped to a local church where some people from our church back in Nottingham are involved. We not only caught up with them briefly, but met another couple of people from Nottingham – one of whom had actually lived in the same house in Mapperley – in fact the same bedroom – as Lizzy had done, just a year or so later!

With our feelings about Auckland gradually improving, we headed off to the airport to catch our flight to Christchurch where we’d start our 17-day exploration of the south island.