Having arrived by bus after our trip to Ketep pass, we were really pleased to find a clean hotel with a hot water shower,  western toilet, free wi-fi, breakfast AND a swimming pool still well within budget 🙂 . We spent a day visiting the Kraton & Water Palace (pretty forgettable and not well maintained or particularly impressive) and then went to a Batik gallery where we were shown how batik is made and then bought a couple of mementos so that we can have a piece of my Indonesian heritage in our house 🙂 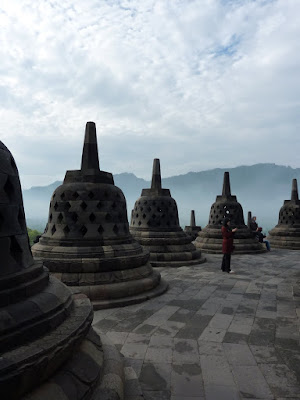 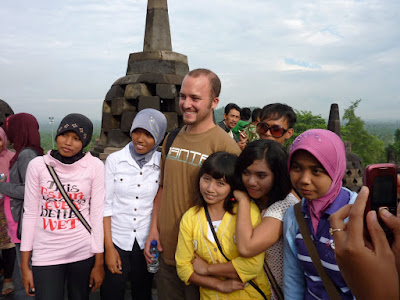 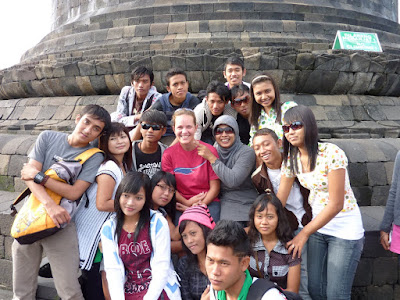 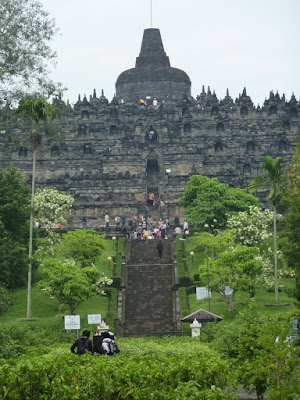 The next day we got up at 4:30am to go and see Borobodur, a huge Buddhist temple, at sunrise. It was pretty impressive as the mists hadn’t completely risen from the ground so the temple was almost floating in a sea of mist. Apart from that, being there so early didn’t seem to have much advantage other than we were maybe there at a quieter time.  There were however, still plenty of ‘local’ tourists who all wanted their photos taken with us.  It still seems bizarre how much effect skin colour can have- I guess the UK is pretty multi-cultural so we’re used to different skin colours whereas here maybe people have only seen ‘white’ faces on the TV. Fortunately, no-one tried to pinch my cheeks (jupet me) as was common when I was a chunky white baby out here, and we were quite happy to provide them with some entertainment.

So verdict on Yogyakarta- an arty place with lots of places to chill out and watch the world go by. Tomorrow we leave for Sumatra, which is four times bigger than Java and far less populated. We’ve been led to believe the travel is much harder over there and it’s even less touristy so we’re ready for a hopefully very rewarding challenge.